The story behind the Toby Mugs at our Main Bar 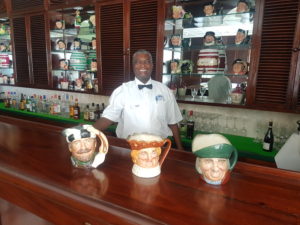 We recently welcomed some new members to our Toby Mug family. These ornaments have adorned the main bar backdrop for many years and are known as popular keepsakes in the UK and the US. They are most popularly found in pubs and bars and are a global collectors item. We decided to do a little research of our own on these popular ornaments and were surprised to find out that they have quite a history.
What is a Toby Jug?

The general consensus is that Toby Jugs were named for an 18th-century Yorkshire man who got the nickname Toby Fillpot after he drank 2,000 pints of Yorkshire stingo (ale). A Toby Jug is a figural ceramic pitcher modeled in the form of a popular character, historical, fictional or generic. It can be a person or animal. The original Tobies date back to the 1760’s.

The first Tobies, made in the form of a seated jovial, stout man dressed in the attire of the period, wearing a tri-corn hat, puffing on a pipe and holding a mug of ale (stingo), are referred to as “Ordinary Tobies.” The tricorn hat forms a pouring spout and a handle is attached to the rear. Many derivations of the original Toby Jug have evolved over two and one-half centuries, most notably into the Character Jug. These drinking mugs were incredibly popular and were commonplace in homes and pubs by the 1820’s.

The next time you take a drink at our main bar now you’ll know the story behind the ornaments that grace our walls!